Data-centric projects are becoming both bigger in size and complexity, which makes execution that much more difficult.  This not only creates delays in project execution but also results in poor data quality.  More and more projects are facing:

Costly Manpower – The manual and repetitive tasks are still not automated and either require manual work or custom coding, which often will take highly skilled talent off of other critical work.

While there are many macro and micro issues affecting the delivery of data engineering projects, the following are some of the underlying causes:

Configuration data, Reference data, and Test data are not managed. A data project requires test data, however, test data is not created in advance nor linked to the test cases.
Reference data is required to initialize the database.  For example, default values for customer types must be created in advance so it doesn’t have any data source. If the reference data is missing, none of the ETL processes will work.
Configuration tables data must also be prepopulated.  Some of the configuration data is used for incremental or delta processing.  Some data values are used to populate metadata about the processes.

The way data processes (ETL) and reports are tested is very different than how software applications are tested. In order to test, the ETL process is executed first and then the data is compared from the original to certify the ETL process. This is because the quality is determined by the expected vs actual. The actual data is the data added or updated by the ETL process and expected is the input data plus the data transformation rule(s).

5. Lack of Automated Build and Deployment

Since most ETL and Report developers use GUI /tools to create their processes, the code is not visible. The ETL tool stores the code directly into its repository. This creates a false narrative that since there is no code, there’s no need to manage, version or integrate.  The majority of ETL tools now provide APIs to import and deploy the code into different environments, the functionality of which is often ignored.

While data transformation rules are provided to developers, the business doesn’t share testing and monitoring requirements during development. Once the developers have completed development, only then the focus shifts to testing. This is now late in the process and quite often this is when users start complaining.  At this late stage is the time when data monitoring issues are considered.

Data Quality and governance is an afterthought. Developers neither seek nor integrates hooks into their data process to monitor the data quality once it’s in production. When the system goes live, there is nothing available for operations to certify the data.

After the system goes live, if any data issues are found, the development team must go back and fix the code.  This creates a big testing challenge in order to complete regression testing since previous/older test cases must be considered to test the ETL flow.  If they’ve not used a test automation tool that stores the rules in a repository, nothing will exist.

Many of the problem statements defined above are already solved in the software development world, implementing concepts such as Agile Development, CICD, Test Automation, and DevOps. It’s time the data world borrows some of these ideas and adopts them in the data world as well.

DataOps is the application of Agile Development, Continues Integration, Continues Deployment, Continuous Testing methodologies and DevOps principles, with the addition of some data specific considerations to a data-centric project.  It could be any of the data integration or data migration projects such as data warehouses, data lakes, big data, ETL, Data Migration, BI Reporting, and Cloud Migration.

How to implement DataOps?

To implement DataOps the organization must focus on three things:

A. Identify the people and their culture

In a data project, there are many types of resources. However, their roles also define their boundary.  Developers, testers on one side of the wall and business users, operations data stewards are on the other side.

DataOps is about removing this wall and the first cultural change required for DataOps is to:

This small change will ensure the developer involves the business users and data stewards right from the beginning of the project.  DataOps adoption results in a transformation of organizational culture, automating every aspect of SDLC from test automation to production data monitoring.  Beyond that, DataOps results in a culture shift, which removes the barriers between development and operations teams that are broken.  There is no more throwing over the wall and running away from the responsibilities.

Now, instead of sequential steps, developers can create the design and develop the tests in parallel to the development of the data pipeline. By using Non-Linear timelines Time-to-Market is now 33% faster. 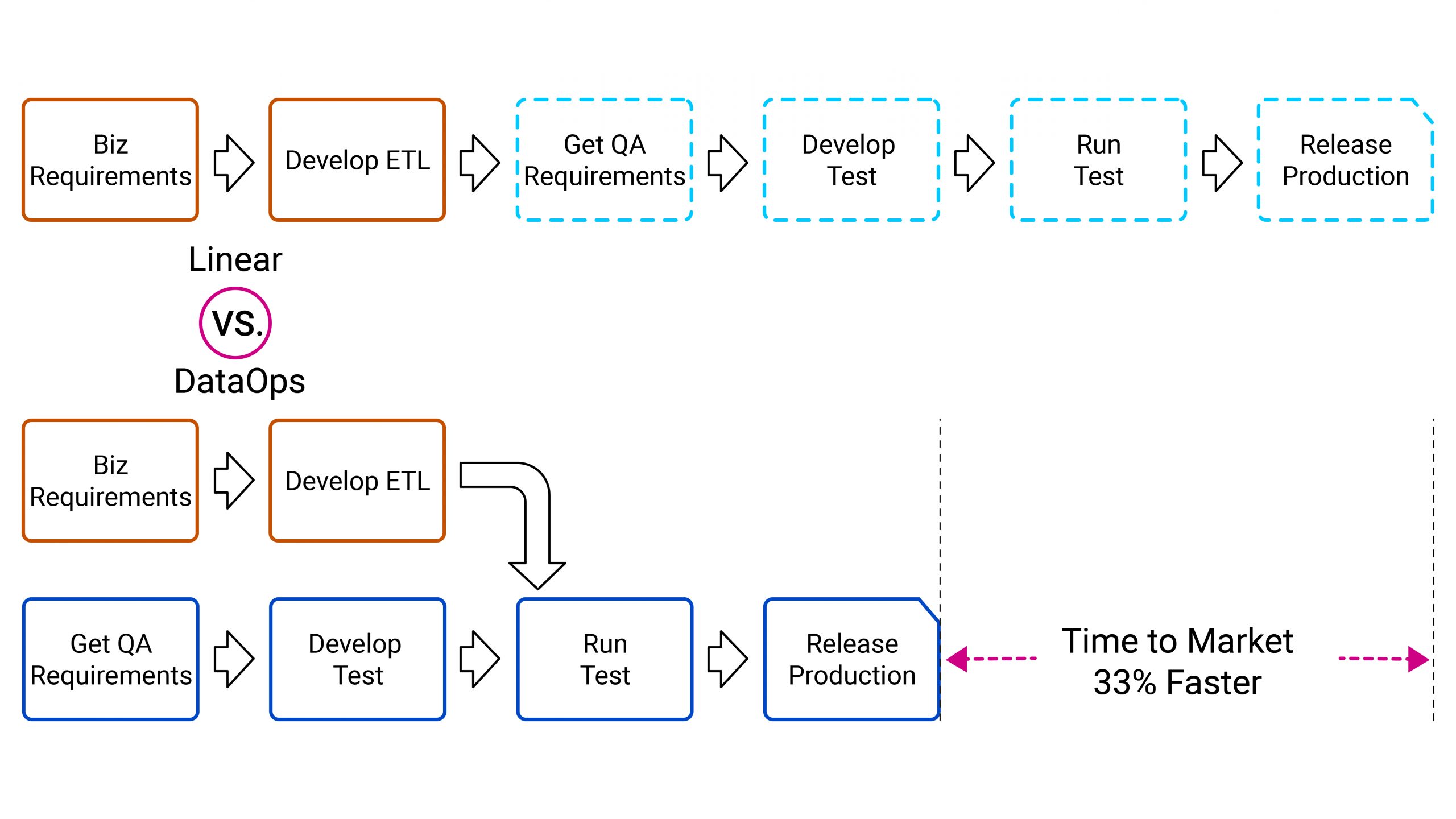 B. Get the automation tools for DataOps

DataOps in not possible with proper automation tools. The organization must acquire multiple software platforms to support DataOps, such as:

The idea is to continuously integrate, deploy, test and monitor the data and processes in an automated fashion. The purpose of each tool will be clearer with the process diagrams in the section below.

a. Develop and Integrate in a Code Repository

DataOps changes both the culture as well as the processes. 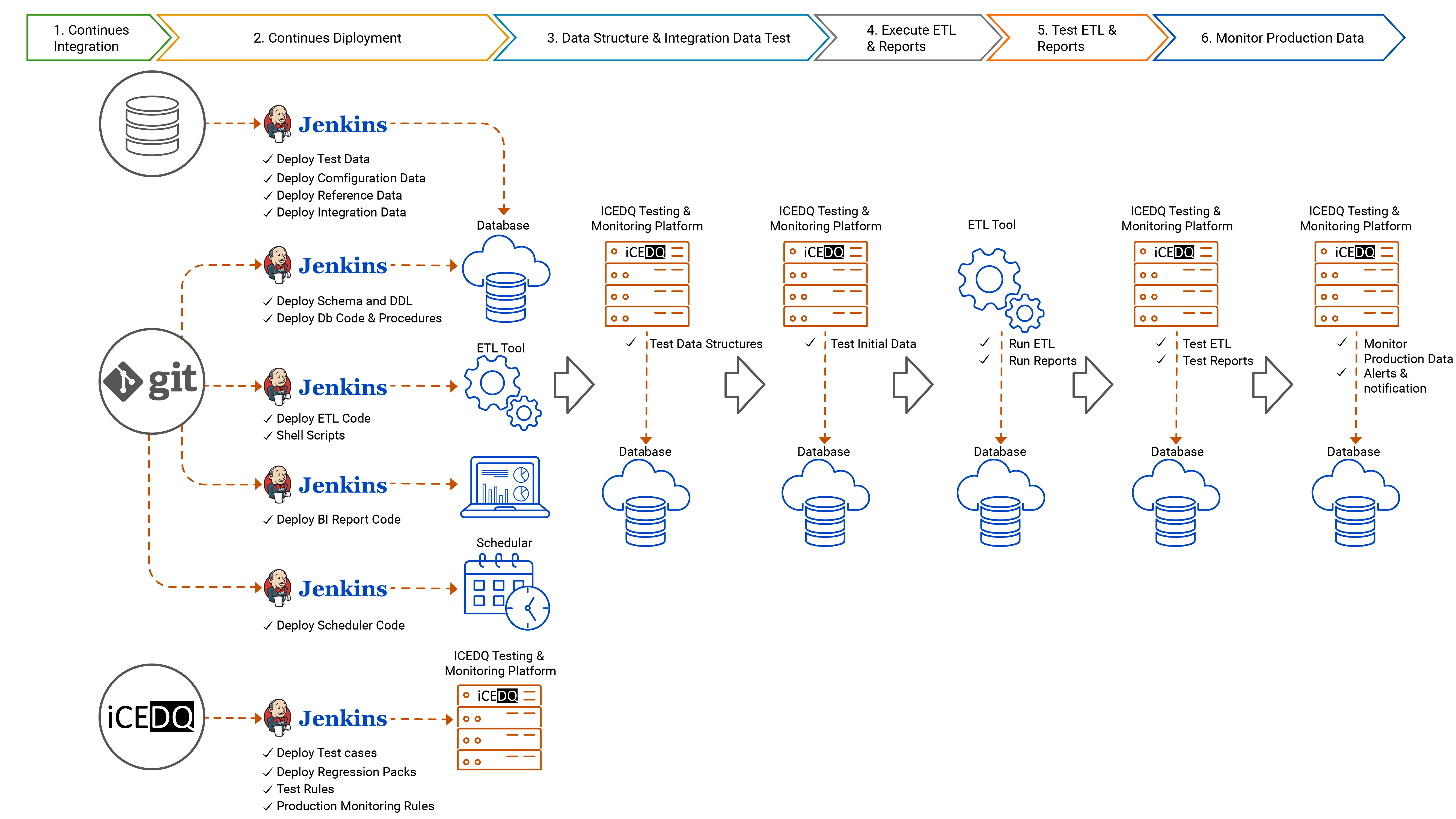 Why DataOps with iCEDQ results in better Data Quality?

One of the direct impacts of DataOps is the improvement of data quality for the data pipeline. There are three core reasons for this:

DataOps is all about reducing data organization siloes and automating the data engineering pipeline. CDOs, business users, data stewards are involved early in the data development life cycle. It forces the organization to automate all its processes, including testing. The data quality tasks are now implemented early in the project life cycle.  This provides enormous benefits to the data development team as well as operations and business teams with data issues occurring in production environments.